Recurring toponyms on the islands

Either when sailing between Italy (Brindisi, Sicily, Taranto, etc) and the Aegean (Athens) or when preparing an itinerary longer than 3 weeks, one has the luxury of two possible passages around the Peloponnese peninsula:

Conclusion: For the experienced sailor the southern passage is definitely worth the 2 or 3 weeks it takes to explore and relish these sequestered shores. Yet, the prevailing winds make the Ionian → Aegean direction much easier than vice versa. Moreover, rounding Cape Malea can be extra difficult during the Meltemi season.

Because of Latin transliteration and even modern Greek pronunciation, two unconnected regions seem related: the Ionia (Ionian - İyonya) in Turkey and the Ionian in Greece.

It was Aeschylus who clarified that the Ionian sea was named after the beautiful priestess Io, who caught the philandering eye of Zeus.
When Zeus' wife Hera was about to catch the couple in flagrante delicto the god changed the girl into a heifer Yet, Hera was not to be deceived and claimed the heifer as a present which she guarded with the efficient help of Argus, the insomniac giant with hundred eyes.

When Hermes, working for Zeus, charmed Argus to sleep and killed him, Io the heifer escaped only to be persued by a terrible stinging gadfly sent by Hera. The first place Io fled to took her name – the Ionian sea – before she ended her bovine swimming marathon in Egypt, where Zeus restored the girl to her rightful form.
As for the unfortunate Argus, Hera collected his hundred eyes and stuck them on the peacock's tail.

In contrast, the Ionian coast in Turkey was named after Apollo's son Ion; the mythical founder of the Ionian race.

Interestingly, for the Ionic order in architecture the proper adjective is used, yet not for the Ionian League, the very culture that developed this style.
Likewise, most yachtspersons use the term “Ionian coast” to describe this northern part of the Turkish Riviera.
Also see the myth & history of the Ionian sea 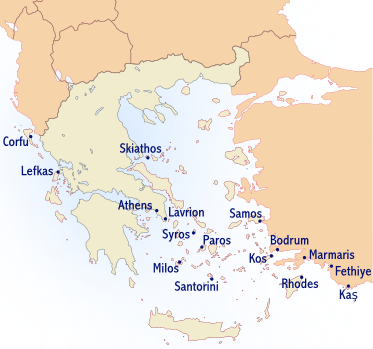 And in Turkey out of:

Usually the most affordable and most available flights are to Athens International Airport, which is close to both Lavrion and the Athens Alimos marina at Kalamaki. The other yacht charter bases in the list above are more difficult to reach by direct flights, so domestic flights and of course the ubiquitous Greek ferries will add to the logistics.